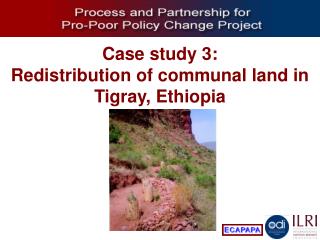 Land Reform in China - . since 1950. transition to socialism . before 1949 feudal warlords controlled much of the land

How to do a Cost-Benefit Analysis in ELD: a case study from the Ethiopian Highlands - . hans hurni university of bern.

Land Redistribution : Towards a common vision - . why do we care about land redistribution today? part i: messages from

PRESENTATION TO THE PORTFOLIO COMMITTEE ON AGRICULTURE &amp; LAND AFFAIRS 12 JUNE 2007 - . implementation of the

Ethiopia - . development plans for internet cafes. geography of ethiopia. ethiopia is the oldest independent country in