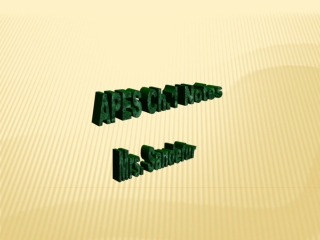 Ch. 10 Notes - . apes: mrs. sealy. structure of the earth. core inner: solid, high temp and pressure, made of: nickel and

Water Pollution - . apes. put name on water, put on back lab bench (by moose study habits poster) get out types of

APES REVIEW - . matter and energy in the environment. organization of matter non-living matter atoms, ions, and

APES: Anonymity and Privacy in Electronic Services - . kuleuven. what is apes?. funded by the flemish government 3

Apes by Rico Diaz - . my animal has black, fur brown eyes, and it has to arms. they have hands on their legs and arms.

APES: End-Of Course REVIEW - . #1a: the diagram below illustrates what environmental principle?. 1b what process is it

APES 8/11/11 - . please write an answer these three questions, without talking at all! what food do teenagers usually