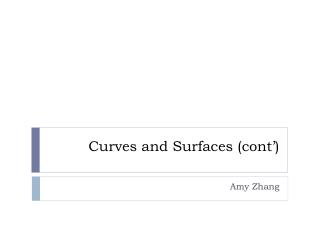 Curves and Surfaces (cont’). Amy Zhang. Conversion between Representations. Example: Convert a curve from a cubic B-spline curve to the Bézier form:. From Curve to Surface. Recall that a parametrically defined curve in 3D is given by three univariate functions: where 0 ≤u≤1 Chapter 8: Cost Curves - . a firm aims to maximize profits in order to do this, one must understand how to minimize costs

Types of Surfaces - . types of surfaces. when light hits different surfaces, it behaves in different ways. surfaces can

Section 4.2 Fitting Curves and Surfaces by Least Squares - . 4.2.1 curve fitting. in many cases the relationship of y

Lecture 5: Curves And Surfaces, and Geometric Modeling - . prepared by: nor helya iman bt kamaludin. introduction about

Interpolating curves - . reading. optional bartels, beatty, and barsky. an introduction to splines for use in computer