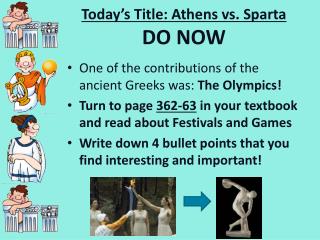 Today’s Title: Athens vs. Sparta DO NOW . One of the contributions of the ancient Greeks was: The Olympics! Turn to page 362-63 in your textbook and read about Festivals and Games Write down 4 bullet points that you find interesting and important! . GREEK WORD OF THE DAY.

Athens and Sparta - . brains vs. brawn. athens. a port on the aegean sea a major trade center traded goods such as olive

ATHENS AND SPARTA - . 2 of the greatest city-states in greece. read pages 292-295 and be prepared to compare and contrast

Athens and Sparta - . athens. great location by the water, but not enough land. economy based on trade agora =

Athens and Sparta - . &quot;the walls of sparta were its young men, and its borders the points of their spears.”

Athens and Sparta - . log into discovery education. when you log in, make sure you are in world history (prehistory-1800)

Sparta vs. Athens - . the true story . table of contents . sparta athens cause and consequences arms and armor . sparta

Sparta and Athens - . activity. read pages 297-301 of your textbook. create a venn diagram to compare sparta and athens

Today’s Title: Athens, Sparta, the Wars Review DO NOW - . knowing what you know about life in athens, life in sparta,

Athens vs. Sparta - . and why athens is better. my reasons. let’s get right down to it. you want to travel to either

Athens v. Sparta - . the greeks rule the world!. created a democracy where every citizen had a vote in every political

Athens vs. Sparta - Warm-up using the dry noodles on your desks, spell out the words that answer the following questions!

Title: Athens vs. Sparta - . do now: list as many things as you can about athens and sparta. how are they similar? how