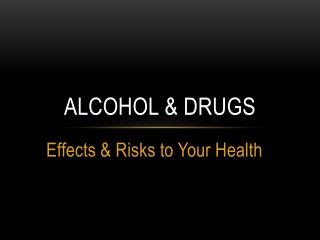 Alcohol & drugs. Effects & Risks to Your Health. STUDENT eXPECTATIONS. After reviewing this Unit, you should be able to: Identify Alcohol’s pathway once ingested Identify the harmful effects & risks of Alcohol on the body Drugs for CCF - . heart failure is the progressive inability of the heart to supply adequate blood flow to vital organs.

Antimicrobial Drugs - . chemotherapy the use of drugs to treat a disease antimicrobial drugs interfere with the

The Family and Delinquency - . themes in the course. drugs: marijuana is less dangerous than alcohol and tobacco prisons

Alcohol - . ethyl alcohol or ethanol only caffeine is used more widely recreational, not therapeutic. vocabulary of