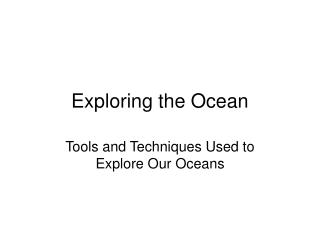 Exploring the Ocean. Tools and Techniques Used to Explore Our Oceans. Research Vessels. Ships and Boats Most common Versatile Can carry many other types of research equipment Wide variety – based on use Large ships with large crews for long term, distant research EXPLORING THE OCEAN - . ms. bridgeland 6 th grade. why have people been interested in studying the ocean since ancient

Exploring the Ocean - . since ancient times people have studied the ocean such as waters and ocean floor it provides food

Ocean Exploring - . photo taken from the smithsonian staff photographers at the national museum of natural history

Exploring People have explored the ocean for thousands of years. - Section 5-1 exploring the ocean. exploring people

The Ocean - . by: mary rose lunde. coral reefs. coral reef. known as the “rainforest of the ocean,” coral reefs are

The Ocean - . a life under the sea. just the facts…. the ocean covers about 70% of the earths surface and contains 97%