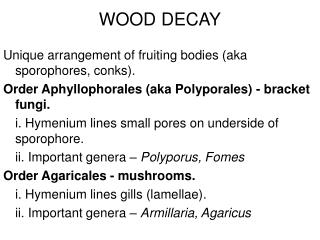 RADIOACTIVE DECAY - . what makes an element radioactive?. it has an unstable atomic nucleus. a nucleus is only stable

Exponential Decay - . decay factor. the constant factor that each value in an exponential decay pattern is multiplied by

Trace decay - . display a trigram card for 3 seconds. after each display, there is a delay (startin g at 5 seconds and

Radioactive Decay - . radioactive materials decay from the “parent” material into the “daughter product”. .

Radioactive Decay - . i can solve half-life problems. radioisotopes decay in a predictable way the time is takes for half

Heartwood Decay - . by: mackenzie shoemaker. description:. a lso known as “heart rot.” single most important and

Tooth Decay - . by: khalifa 7b. learning objective by the end of this power-point you will be able to:. describe how

Exponential Decay - . exponential decay. a quantity is decreasing exponentially if it decreases by the same percent r in

Radioactive Decay - . read pages 191-196. 157. atoms are held together by. the strong nuclear force. there are different