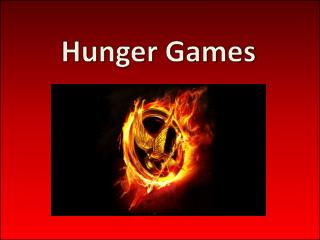 Hunger Games. Production. Which film studio produced the film? Who directed it? Which actors starred in the film? Were any ‘Big name’ actors and/or production personnel associated with the film? How much did it cost to produce? Hunger Games - . by: jackie tillotson. suzanne collins after she met james proimos a children’s writer she was inspired

The Hunger Games - . greek mythology and ancient rome. the myth of theseus and the minotaur. bad guy: king minos of crete

Hunger Games Jeopardy!!! - . final jeopardy. what district is rue in?. district 11. what did katniss call the girl from

The Hunger Games - Definition of a narrative: a  story or account of  events, experiences, or  the like , whether