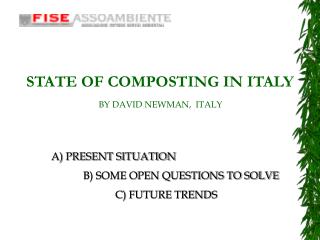 STATE OF COMPOSTING IN ITALY BY DAVID NEWMAN, ITALY. A) PRESENT SITUATION B) SOME OPEN QUESTIONS TO SOLVE C) FUTURE TRENDS. Future Trends in Education: Where are We Heading? - Ferran ruiz i tarragó generalitat de catalunya departament

The FFA: Who are we? The Past, Present and Future - . introduction to agriculture. student learning objectives. 1.

Past, Present and Future - . week 7 it 22. this teacher led activity aims to help children differentiate between verbs in

present - Future. we use tenses of verbs to refer to actions or situations in the present, in the past and in the future

Present Perfect - . in english , the present perfect is essencially a present tense, but it also expresses the effect of

Chapter 5 - . the time value of money. learning objectives . calculate present and future values of any set of expected

Sequence of Tenses - . spa2020 intermediate spanish ii. step one. does the sentence have a “ si ” clause? yes- what