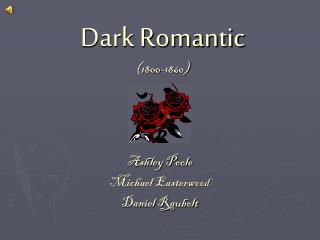 The Dark Romantic Period (1800-1860) - . powerpoint by: sarah nick and cameron. dark romantic period. this was around the

The Romantic Period in American Literature

Dark Romanticism (American Gothic) - . a response to transcendentalism the individual is prone to sin and

The American Romantic Movement (aka The American Renaissance) - . ~ 1800-1860. romanticism. the name given to those

Romanticism 1800-1860 - . leading up to the romanticism period:. deism belief that god made it possible for all people at