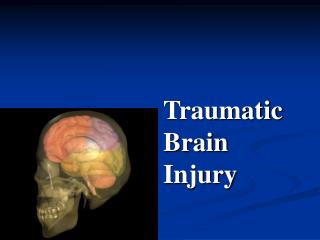 Traumatic Brain Injury. The effects of trauma to the skull and brain, during closed head injury depend upon a number of factors: (a) the shape of the objects causing the trauma, (b) the force of the impact, (c) whether the head is in motion at the time of impact.

Adolescent Brain Development - . i will send you this presentation. jburkmd@roadrunner.com you will see this slide again