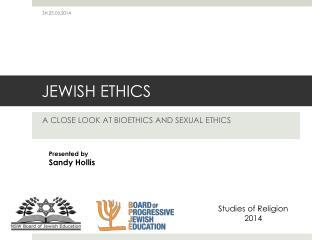 JEWISH ETHICS. A CLOSE LOOK AT BIOETHICS AND SEXUAL ETHICS. Presented by Sandy Hollis. Studies of Religion 2014. HALACHA. Based on Torah Certain choices are left to man’s moral sense. Raises the consciousness of the people. Dynamic. BIOETHICS. Jewish Ethics - . do now: please write an answer to these questions:. 1. how do you decide what is ethical? 2. why be

Jewish Ghetto’s - . by: ericka anthony. a ghetto is a certain area where jews are relocated to. the area is surrounded

Jewish Ghetto’s - . by: ericka anthony. a ghetto is a certain area where jews are relocated to. the area is surrounded

Jewish history - . a history of persecution. slaves in egypt. baby moses was saved. but other babies were murdered. queen

Jewish Revolutionaries - . revolutionary traditions amongst europe and america’s jews, from 1850 who the jewish

Jewish Thinkers - . presented by rabbi jeffrey cohen. significant people and ideas. the contribution to judaism of one

Jewish Terms - . sabbath / shabbat the 7 th day of the week is the sabbath or shabbat (saturday). god rested on the

Jewish Symbols - . from living judaism by rabbi wayne dosick. magen david. star of david was on the shields of david’s

Jewish Partisan - . by s hahad abdulsahib. who?. the partisans were a group of jewish people from europe who fought and