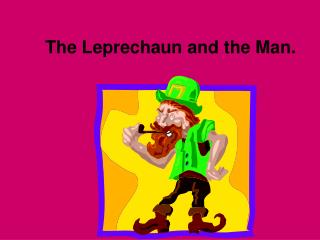 The Leprechaun and the Man. Once there was a leprechaun that lived in a small house at the edge of the forest. The leprechaun was a smart fellow but very greedy. He loved gold. He loved gold so much that if no one was looking, he would steal their gold right out from under their noses. EVAN THE LUCKY LEPRECHAUN. - Evan the lucky leprechaun. i found my leprechaun when i was at a haunted house. my

Liam the Mischievous Leprechaun - . by dannielle mcclure, 2009. liam is a leprechaun. he is a fairy from ireland. he

Where is Liam the Leprechaun? - . by dannielle mcclure, 2009. liam is a leprechaun. he is a fairy from ireland. he enjoys

“The Highway” and “The Man” - Describe with your neighbor what the common theme is between these two stories?

The Man and The Echo - . w.b. yeats. analysing the poem. the title multiple readings reading it out loud notes on what it

The Man and The Echo - . by william butler yeats. read these extracts from the poem. ….all that i have said and done

Man and the Echo - . question. ‘i lie awake night after night/ and never get the answers