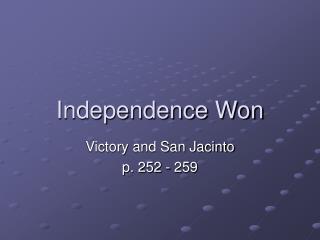 INDEPENDENCE WON CHAPTER 11 - . the road to san jacinto. santa anna ordered his troops to burn every town and settlement

11.5 Independence Is Won - . the runaway scrape. general sam houston had the task of defeating santa anna so that texans

Texas Independence Won at the Battle of San Jacinto - . chapter 12. the road to san jacinto. the texas cause seemed

Sung-Won Lee - Study of jets production association with a z boson in pp collision at 7 and 8 tev with the cms detector.