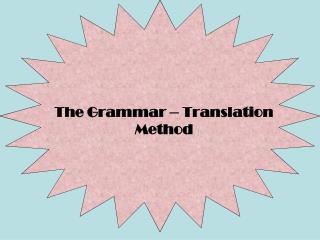 The Grammar – Translation Method. Background. The grammar-translation method of foreign or second language teaching (which owes its name to its making use of translation and grammar study as the main teaching and learning activities) is one of the most traditional methods. Also called. Translation - . samuel butler: commonly mistakes the one and misinforms the

‘The Death of Turnus ’ Annotation and Translation - . annotate and translate the passage in groups 1 person will lead

Grammar English 9B - . updated 2010. questions on the english portion of the act test fall into two categories:.

Translation Theory and Practice - Definition of translation. ??:a course in the school curriculum, a job, a piece of