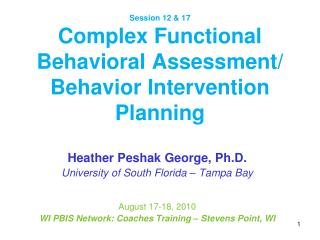 Ziggurat Model: A Functional Approach to Autism Planning - . overview of the ziggurat model and the comprehensive autism

Analysis of Complex Survey Data and Survival Analysis - . this session will cover an overview of issues in analysis of

Bio-Behavioral Approaches to the Assessment and Treatment of Autism - . wayne w. fisher university of nebraska medical

Unpacking Standards: An Introduction - . review of the plc process for curriculum, instruction, and assessment. session