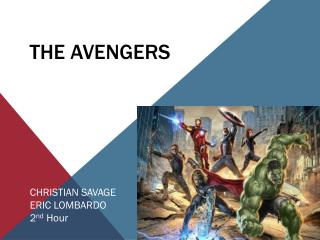 The Avengers. CHRISTIAN SAVAGE ERIC LOMBARDO 2 nd Hour. Who are the avengers?. Iron Man: millionaire who has created a suit in which he protects humanity with. Thor: God of Thunder. Hulk: Scientist who cursed himself with a virus. Captain America: Genetic engineered soldier. Fra filmen The Avengers Bilder: Marvel - . «i come with glad tidings of a world made free – from freedom. freedom is

Avengers Party Supplies ideas in USA - Which makes the special items unspecial for them. if you have a limited budget,