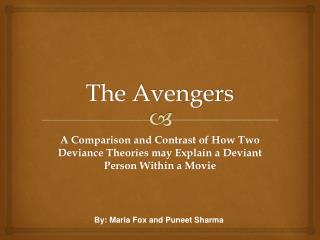 The Avengers. A Comparison and Contrast of How Two Deviance Theories may Explain a Deviant Person Within a Movie. By: Maria Fox and Puneet Sharma. Table of Contents. Introduction The Avengers Movie Objective Theory Subjective Theory Merton’s Anomie Strain Theory