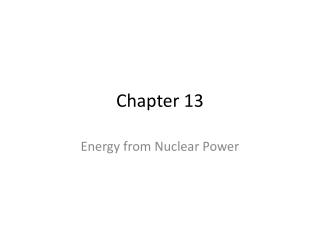 Chapter 13. Energy from Nuclear Power. Introduction. Read the intro to CH. 13 (on page 331) and be able to answer the following ?s: What was the cause and effect of the accident in Japan? How much of Japan’s electricity is supplied by nuclear power? . 13.1. Nuclear energy in perspective. Chapter 13 - . leadership. learning objectives after reading this chapter, you should be able to:. distinguish between