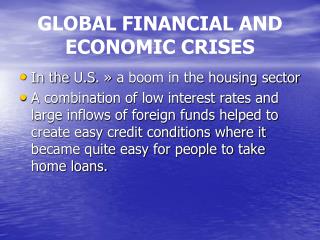 GLOBAL FINANCIAL AND ECONOMIC CRISES. In the U . S . » a boom in the housing sector A combination of low interest rates and large inflows of foreign funds helped to create easy credit conditions where it became quite easy for people to take home loans. . The Current Economic and Financial Crises - . how did we get here?. background housing market mortgage market main street

Some reflections on the financial and economic crises - . luc soete unu-merit, university of maastricht the netherlands.

Economic policy and fiscal crises - . lars calmfors beyond the crisis? the financial crisis and its global impact