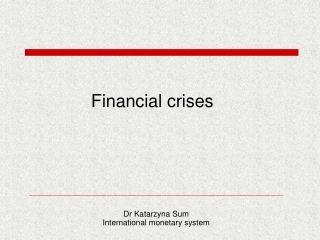 GLOBAL FINANCIAL AND ECONOMIC CRISES - . in the u . s . » a boom in the housing sector a combination of low interest

Why banks cause crises (and how to stop them) - . steve keen university of western sydney www.debtdeflation.com/blogs.

Financial Crises Why They Occur, What to Do about Them, and Implications for the Investment Market - . e. maskin