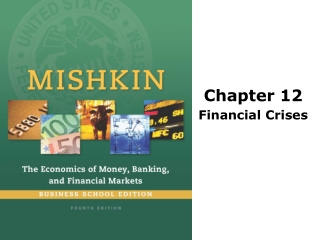 Chapter 12 Financial Crises. Preview. This chapter makes use of agency theory, the economic analysis of the effects of asymmetric information (adverse selection and moral hazard) on financial markets, to see why financial crises occur and why they have such devastating effects on the economy. Financial Crises: Can They Be Prevented? - Prof. mohd nazari ismail faculty of business and accounting university of

Financial Crises: Why They Occur and What to Do about Them - . e. maskin institute for advanced study. current financial

Minsky and Godley and financial Keynesianism - . marc lavoie university of ottawa. some justification. the current

Chapter 5 - . the u.s. and european financial crises. the seeds of crisis: sub-prime debt. 0. the origins of the current

BANKING SYSTEM OF UKRAINE IN THE CONDITIONS OF FINANCIAL CRISES - . presented by: nnaemeka ezenwa.