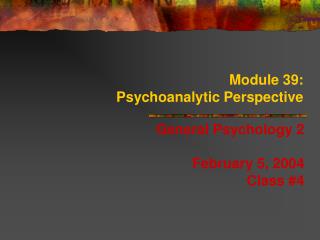 Module 39: Psychoanalytic Perspective. General Psychology 2 February 5, 2004 Class #4. I’m just the messenger…. To the women in our class, don’t take it out on me… Module 3 Use, calibration and maintenance of laboratory equipment - . learning objectives. at the end of this module you

Interpretations of prose and poetry - . learning outcome: by the end of the lesson we will be able to discuss the