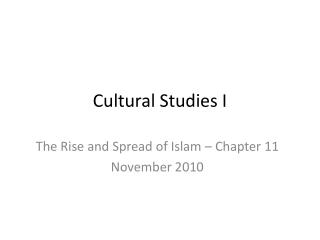 Cultural Studies I. The Rise and Spread of Islam – Chapter 11 November 2010. Islamic Civilizations. Origins Islam began on the Arab Peninsula – one of the world’s youngest religions Islam was proclaimed by Muhammad in the town of Mecca in 610 CE How is it linked to Judaism and Christianity?.

GNH survey findings 2010 for Haa Dzongkhag - . the centre for bhutan studies. note: the findings in this slides applies

A2 PE COMPARATIVE STUDIES: The USA - . the usa: a cultural

Cultural Competency Learning Objectives - . what culture and cultural competency is evaluating ourselves why it is

Cultural Diversity - . understanding our differences through an examination of the karen tribes people. university of

TRANSCULTURAL ISSUES IN THE DIAGNOSIS AND TREATMENT OF DEPRESSION - Learning objectives by the end of this presentation,