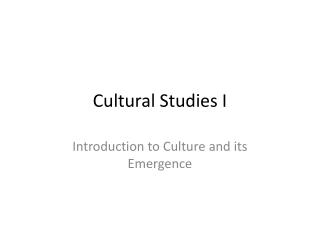 Cultural Studies I. Introduction to Culture and its Emergence. Definition of a culture : ‘A culture is a way of thinking and living established by a group of people and transmitted from one generation to the next. It is, in other words, the basis of communal life’. (page 5) QUESTIONS: