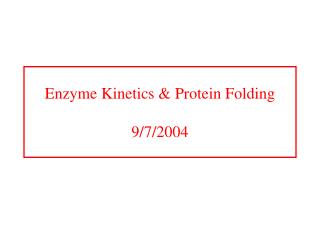 Enzyme Kinetics & Protein Folding 9/7/2004. Protein folding is “one of the great unsolved problems of science” Alan Fersht. protein folding can be seen as a connection between the genome (sequence) and what the proteins actually do (their function). Protein folding problem. Reaction kinetics - . r1. the rate of reaction. consider the following reaction. (r1). a and b are the reactants, c and d