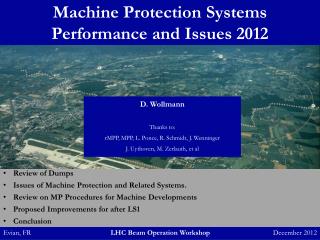 Machine Protection - . can the upgraded lhc be protected? scenarios intensity upgrade (from 0.58 a to 1 or 1.7 a) energy

Machine Protection and Operation - . l. ponce with the help of j. wenninger , m. lamont, a. macpherson and special thanks

Performance Issues - All access to the data is routed through the dbms. additional layer could slow retrieval and