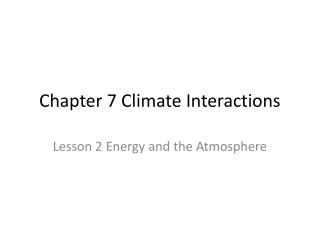 Land/Climate Interactions - . lecture 1: global hydrology. a “walking tour” through the global water cycle, with an

Chapter 7 Cell to Cell Interactions - . when a signal molecule arrives at a g protein-linked receptor, the g protein

Climate and Terrestrial Biodiversity : Chapter 7 - . let’s dance. stand up. your face is earth. i am the sun. where is

Chapter 7-2 Ocean Currents and Climate - . what are currents and how do they affect us?. surface currents: are rivers of

Interactions between ocean biogeochemistry and climate - . guest presentation for at 762 taka ito. how does marine