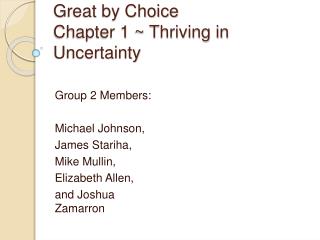 Thriving In Change - . one view of change. “the certainty of misery is better than the misery of uncertainty.” pogo

The Great Gatsby Chapter 1 - . by f. scott fitzgerald. characterization - nick. nick is initially portrayed as the

Choice under uncertainty – complete ignorance - . problem. the set of possible actions/acts the set of states of nature

Thriving in Chaos - . a model for personal leadership development in the 21 st century. what’s it all about?. a bit