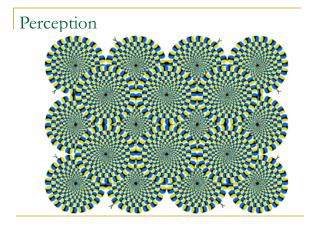 Perception. It’s not as Easy as it Looks. Sensation and Perception. Sensation The process through which the senses pick up visual, auditory, and other sensory stimuli and transmit them to the brain; sensory information that has registered in the brain but has not been interpreted Perception

Presentation on Perception - . add your name here. what is perception??. perception. how we see the world around us