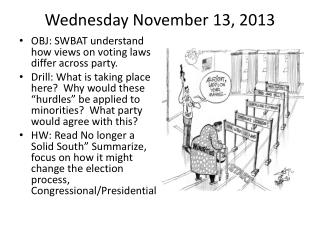 Wednesday November 13, 2013. OBJ: SWBAT understand how views on voting laws differ across party. Drill: What is taking place here? Why would these “hurdles” be applied to minorities? What party would agree with this?

Monday November 11, 2013 - . obj: swbat understand redistricting, and the effect that gerrymandering can have on an

IS 325 Notes for Wednesday September 30, 2013 - . data as a resource. proper delivery of information not only depends on

NOVEMBER 2013 - Supporting the brave new world of the 4as: anytime, anywhere, anyhow and anything. glenford mapp