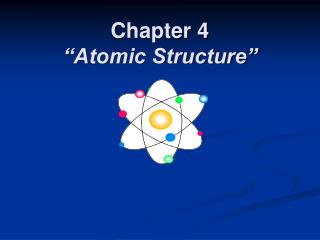 Chapter 4 “Atomic Structure”. Defining the Atom. The Greek philosopher Democritus (460 B.C. – 370 B.C .) was among the first to suggest the existence of atoms (from the Greek word “atomos”) He believed that atoms were indivisible and indestructible Chapter 9 Molecular Structure - . under what rules do atoms form

Chapter 7 - . atomic structure. light. made up of electromagnetic radiation. waves of electric and magnetic fields at

ATOMIC STRUCTURE - . james maxwell developed an elegant mathematical theory in 1864 to describe all forms of radiation in