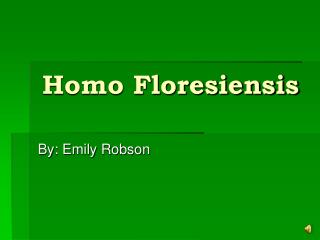 Homo floresiensis - The study of human evolution is a work in progress …. pierolapithecus catalaunicus. homo

Homo Floresiensis AKA the Hobbit - . by regina barasch. what is homo floresiensis ?. a species of dwarf human only about

Homo Habilis - . what are they????. importance. they made