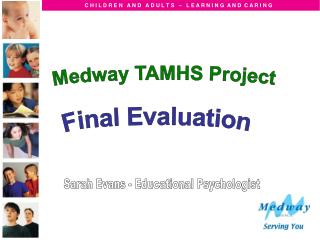 Medway TAMHS Project. Final Evaluation. Sarah Evans - Educational Psychologist. The Targeted Mental Health in Schools programme (TAMHS) was set up by the DfES in 2008, with funding for three cohorts of 2 year projects. Obesity in Medway - . take over day. medway young commissioners volunteered one of the priority issues in medway

Why Engineering at Medway? - . mark clements program leader computer networking. how to do engineering. take an idea for

Rotary Club of Medway - Aren't we lucky !. rotary club of medway. aren’t we lucky!! if we are thirsty what do we do ?

Medway FNP Annual Report 2011 - . challenge how to protect and improve the outcomes for children whose parents have had a