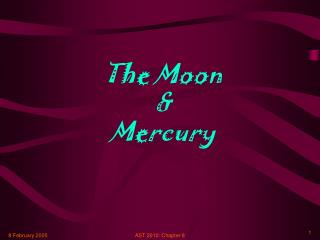 The Moon & Mercury. Cratered Worlds. The Moon is our nearest cosmic neighbor the only other world humans have ever visited Mercury is in many ways similar to the Moon Both are relatively small lacking in atmosphere deficient in geological activity Moon Phases - . if you watch the moon from night to night you will notice that it seems “wax” larger from a new moon

CRT Review 3 rd Quarter - . an astronomical unit is the average distance _____. between mercury and the sun between

3-1 The moon - . 3-1 the moon. exploration of the moon. some imagined seas and inhabitants. what is the nature of these

General Astronomy - . earth and moon. the double planet. the earth-moon system is unique in this solar system in that