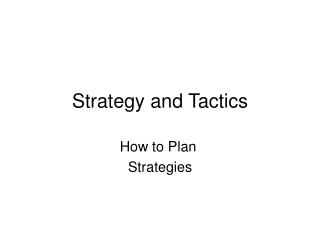 Strategy and Tactics. How to Plan Strategies. What is strategy. It is the relation between Ways- Means- and Ends Strategy in deal making : is a directed Plan Strategy &amp; Tactics - . definitions. strategy - the science and art of employing all available forces in as

Strategy and Tactics with Limited Staffing - . john m. buckman iii. never forget why it is so important that everyone

Strategy and Tactics of Distributive Bargaining - . negotiation is an interpersonal decision-making process by which two