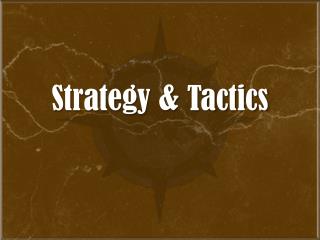 Strategy & Tactics. Definitions. Strategy - the science and art of employing all available forces in as effective a manner as possible to achieve a successful resolution Tactics - the methods and concepts used to accomplish particular missions Inbound Selling Machine [How to Use Hubspot to Create Content that Sells] - Http://unfunnel.com/inbound-sales-machine

Strategy - . is it a plan, a plot, a learning curve ? no – its strategy !. the organization in its environment.

Chapter 16 EC Strategy and Implementation - . learning objectives. describe the importance and essentials of business and

STRATEGY FOR ACCOUNT MANAGERS - . developing and honing your strategic skills. presented for the 4a ’ s, 11/17/11, by

‘Strategy and the Internet’ vs. ‘Rethinking Strategy in a Networked World’ - . articles by michael e. porter and

Standards Based Grading: An Intro - . gerry swan. all men can see the tactics whereby i conquer, but what none can see is

Grant’s Grand Strategy and Sherman - . lsn 11. unity of command. from manassas to chattanooga, the federals had fought