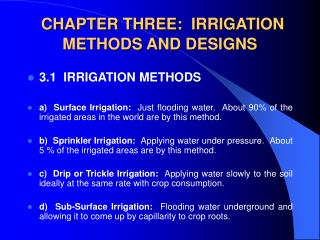 Precision Irrigation and Fertigation - . what is irrigation? irrigation is the application of water to a crop for

Surface Irrigation - . surface irrigation. water flows across the soil surface to the point of infiltration oldest

History of Irrigation 1 - . at least 6 major irrigation based civilizations arose between 2000 and 6000 years ago: in

The Impact of Farm Size on Irrigation Practices and On-Farm Irrigation Efficiency in the Elephant Butte Irrigation - Ict.

CHAPTER 8 Foundations of design - Research methods in clinical psychology: an introduction for students and practitioners