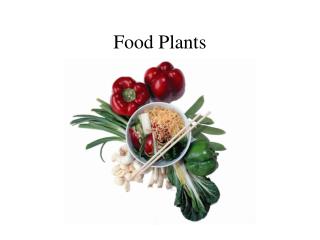 Chapter 22 - . plant diversity. 22–1 introduction to plants. objectives. explain what a plant is describe what plants

LIFE CYCLES AND GROWTH OF PLANTS AND ANIMALS - . how do plants reproduce? when a plant grows, it goes through a series of

Food Defense - . in a food preparation and service setting. courtesy of food technology magazine, from

POISONOUS PLANTS - Treat unknown plants with respect , and teach your children to do the same . m any plants are

CANADA’S FOOD GUIDE - . history of the guide the food groups recommended daily servings what is a serving.

Animal Nutrition - . 0. 33. food is taken in, taken apart, and taken up in the process of animal nutrition in general,

Coordination and Response in Plants and Animals - . introduction. response of plants and animals. syllabus objectives