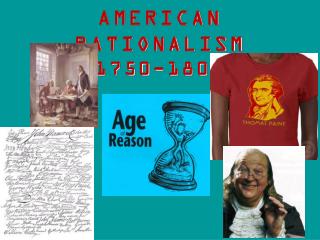 AMERICAN RATIONALISM 1750-1800. RATIONALISM. RATIONALISM – the belief that human beings can arrive at truth by using reason , rather than by relying on the authority of the past, on religious faith, or intuition. A REACTION AGAINST PURITANISM. AMERICAN RATIONALISM 1750-1800 - . rationalism. by the end of the 17 th century, reason began to present a challenge to

American Rationalism - . revolution writing, persuasion and rhetoric. we are going to learn…. influential people of the

Classical Music 1750 - 1800 - . higher music. characteristics. a less complicated texture than had been evident in

A Nation Is Born 1750-1800 - . enlightment or age of reason. characteristics: -valued reason over faith -believed