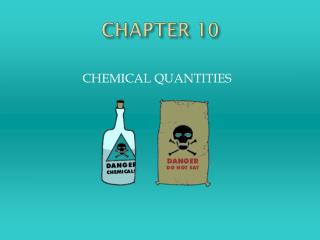 CHAPTER 10. CHEMICAL QUANTITIES. What is a Mole?. In chemistry you will do calculations using a measurement called a mole. The mole, the SI unit that measures the amount of substances, is a unit just like the dozen. The mole can be related to: the number of particles( ion,atoms , etc.)