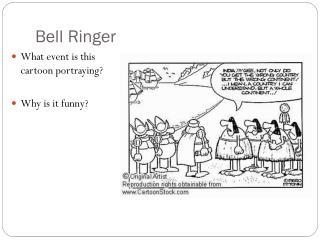 Bell Ringer. What event is this cartoon portraying? Why is it funny?. The Nation’s Beginnings Prehistory-1824. Chapter 1. Many Cultures Meet. Scientists believe that the first people to inhabit America moved here between 15-40,000 years ago Why is there such a large range on this number?