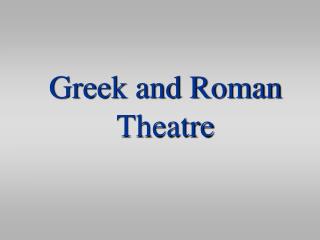 Roman Theatre - . borrowed greek ideas and improved on them they were less philosophical encompassed more than drama :

GREEK AND ROMAN - . drama. beginnings. festival to honor dionysus god of wine and fertility hope for blessing for

GREEK THEATRE - . religon and theatre were connected for the greeks, theatre celebrated the god

Greek Theatre - . the tragedy of it all. compiled by amy. greek theatre.

Roman Theatre - . horace 65-8 bce. son of freed slave father sent him to athens and rome for education to eventually get

Ancient Greek Theater - . this is where it all began: the theatre of dionysus in athens. introduction to greek