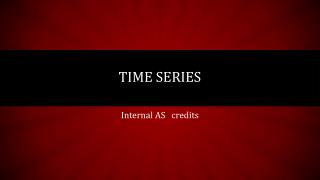 Time Series. Internal AS credits. Applications : . The usage of time series models is twofold: Obtain an understanding of the underlying forces and structure that produced the observed data Forecasting , monitoring or even feedback and feed-forward control. . Time Series - . techniques and an example from roger simon’s the city building process. what is a time series?.

Time Series - . a time series is a sequence of measurements of a variable that is a function of time. components of a

Time Series - . from regression to time series. review of regression analysis. regression: y = f(x), where x is some

TIME SERIES - . ‘time series’ data is a bivariate data, where the independent variable is time. we use