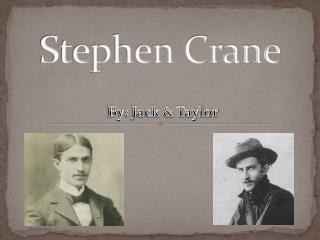 Stephen Crane. By: Jack & Taylor. About the Author. Stephen Crane was born November 1 st , 1871 in Newark, New Jersey. For many years he had been writing, but his first novel, which he published himself,  Maggie: A Girl of the Streets: a Story of New York  (1893) was unsuccessful. Crane Airspace - Mantikore cranes are providing calm emanation electric airspace cranes in the world. these are suited to

NSWC Crane - . “harnessing the power of technology for the warfighter”. sopmod program overview. 15 may 2003.

Farana Crane -    are you looking for crane rental services? visit radha cranes for its professional services and