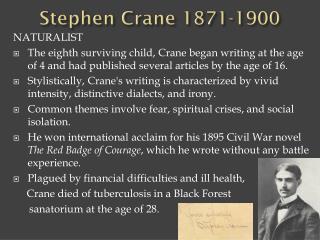 Stephen Crane 1871-1900. NATURALIST The eighth surviving child, Crane began writing at the age of 4 and had published several articles by the age of 16. Stylistically, Crane's writing is characterized by vivid intensity, distinctive dialects, and irony. GERMANY IN 1871 - . the creation of a single germany state had been a long- standing ambition of most german-speaking