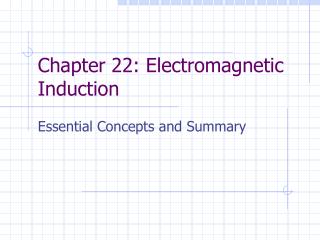 Chapter 22: Electromagnetic Induction. Essential Concepts and Summary. Induced EMF and Induced Current. Relative motion between magnet and coil produce an induced current The coil behaves as if it were a source of emf, known as induced emf NEW EMPLOYEE INDUCTION - . welcome to the family. objective. to make a new recruit familiar with various aspects for

Electromagnetic Fields - . thank you for turning off your cell phone…. the spinning core of molten iron miles beneath

Corporate Health and Safety Induction - . left click as you finish reading each slide to progress through the show. move