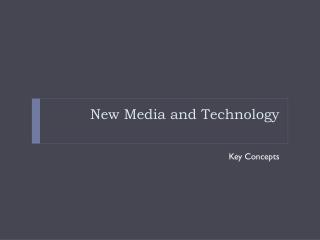 New Technology: Social Media - . and the online communities t hat it builds. did he realize what he was doing?. what

TECHNOLOGY AND MEDIA - . edm152. media and the usage. object (model, chart, video, blackboard) that teachers use or what

Media and Instructional Technology - Group 3. a presentation for the course. media and instructional technology. done by:

Technology and Social Media - . enhance your cert program. building your social media program communicating during and

New Media Habits and New Technology Affecting the Practice of PR - Not so much of a tech savvy geek anymore. more of your

Media Technology - . the power of television.

REDEFINING HUMAN SECURITY CONCERNS: NEW MEDIA AND SOCIAL TECHNOLOGY - . engaging the next generation of leaders . the

Film and New Media - . film and new media. with increased internet speeds the use of video on the internet has become