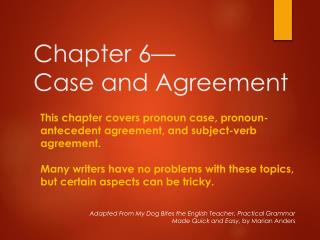 Chapter 6 — Case and Agreement. This chapter covers pronoun case, pronoun-antecedent agreement, and subject-verb agreement. Many writers have no problems with these topics, but certain aspects can be tricky. Chapter 11: The Object-Oriented Approach to Design: Use Case Realization - . systems analysis and design in a changing

Chapter 9 Contract Formation - . introduction. promise is a declaration that something will or will not happen in the

Basic Bankruptcy - . is filing bankruptcy the best solution? if so, chapter 7 or chapter 13? when should case be filed?