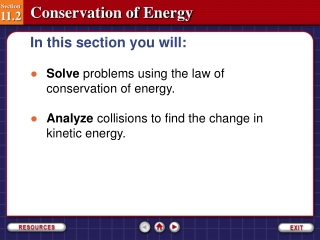 In this section you will:. Solve problems using the law of conservation of energy. Analyze collisions to find the change in kinetic energy. Section 11.2. Conservation of Energy. Consider a ball near the surface of Earth. Job Seeker’s Workbook - . table of contents. section 1: getting started section 2: your job is out there section 3: